Come and visit this wonderful site from our guide “Destination Coeur de Bretagne” the heart of Brittany, le Domaine de Trévarez.
At Trévarez there is not only a castle but also beautiful gardens which have looked out over the Aulne valley for over a century. You will be amazed by the castle’s neo-Gothic architecture, its immensity and its roof which points up into the heavens. The combination of brickwork and Kersanton stone have led to it being given the name “The pink castle” (“Château rose”).

This monument, with its eventful past is now the scene both  of a permanent exhibition, as well as temporary exhibitions, including events organized throughout the year in both the park and the stables.

It has 20th century heritage with surprising modern conveniences.

The history of Le Domaine de Trévarez is clearly marked by the hand of one man, James de Kerjégu. This wealthy politician, who divided his life between local heritage and his life in Paris among the aristocracy and the bourgeoisie, decided more than a century ago to build an edifice fitted with the most innovative equipment of the time. Lifts, electricity and heating were all symbols reflecting the luxury and modernity of the place. This was all a short-lived splendour, bombed during the Second World War, the castle and grounds were left abandoned until the Conseil Départemental du Finistère bought the estate and opened it to the public in the 1970s.

Since 2001, many exhibition spaces have been opened to visitors and there are many ways to visit them. The descriptive signs posts will enable you to see how the estate was organized and planned, and to understand the sometimes surprising history of the castle. Inside the castle, the exhibition “Building a dream” takes you right back to autumn 1907 and situates the building in the context of “La Belle Epoque”, through an outline of the lives of the men and women who lived there.

The grand salon in the west wing which was bombed in 1944 has been restored to its former glory thanks to a reconstitution presented in virtual reality. 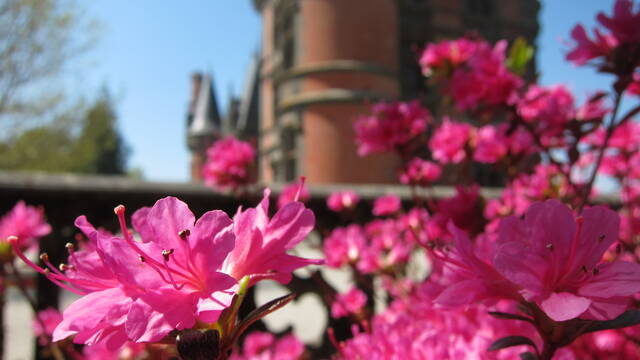